The energy that would be saved if homes and businesses were prompted to upgrade their systems is enough to offset the closure of coal-fired power stations, writes Hamish McGovern.

There are easy gains to be had from investing in energy efficient technology but consumers need to be pushed along. A recent report by the Energy Efficiency Certificate Creators Association (EECCA) found energy savings schemes operating across Australia are the key support mechanism for reducing the cost of meeting renewable energy targets and other climate change policy commitments.

Millions of energy savings installations which would not have occurred without the energy savings schemes in Victoria, NSW, South Australia and the ACT will meet combined targets of almost 12 million MWh a year by 2020. Each scheme has a different target metric and for the first time we have provided a direct comparison by converting the targets to MWh. This shows that the combined contribution is significant and should turn the heads of policymakers across the nation. These targets should be bigger! (See first chart.) The largest schemes operating in Victoria and NSW, which are certificate-based, have both exceeded their targets this year with Victoria already on track to exceed the 2017 target by 50%. (See second chart.)

The schemes are working and industry has all the right signals to keep delivering energy saving solutions – the targets set to 2020 will be easily achieved.

When targets are being achieved, however, installations can slow down. If targets were higher more installations would happen and generally sooner. That is what every jurisdiction in Australia needs – energy efficiency doing as much heavy lifting as possible. Analysis in our report demonstrates how 50% of Australia’s emission reduction target attributable to the electricity sector’s fair portion could be met through improved energy efficiency delivered via such schemes.

While the debate continues over the pros and cons of a national Clean Energy Target, National Energy Guarantee and Demand Management Incentive Scheme, etc, the energy savings schemes are actually delivering downward pressure on peak and baseload demand and energy prices, providing energy bills relief and delivering on their emissions reduction targets – and all this benefit at the lowest greenhouse gas abatement cost.

Our report provides analysis showing that in 2016 energy savings delivered via the schemes was a bit more than demand reduction from rooftop solar (see third chart). 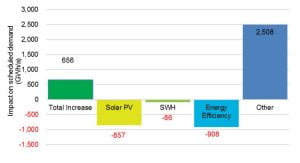 The report also provides a one-stop shop for the most recent modelled net economic benefits. We know that the two largest schemes – Victoria and NSW – have delivered benefits at much lower than expected cost. The report summaries this based on the energy efficiency (white) certificate price average for 2017 (first six months), which is much less than modelled (for Victoria average certificate spot price of $12.94 versus modelled at $25.80 and NSW average certificate spot price at $16.27 versus modelled at $21.00).

The millions of installations are adding up to significant and compounding impacts over time, benefiting participants undertaking upgrades as well as those who aren’t. This is providing broader social as well as net economic benefits which haven’t necessarily been included in the initial modelling.

No schemes, no upgrades

There is a lot of talk about lighting being the major activity being implemented via the schemes and the cost of LED technology dropping dramatically, so wouldn’t installation happen anyway? Our experience is that this isn’t the case. Recent research as well as anecdotal experience from our members shows that households and businesses generally aren’t installing more energy efficiency options outside of the schemes. For example, in other jurisdictions that don’t have schemes (Queensland, Western Australia, the Northern Territory and Tasmania) uptake is much, much lower.

These schemes are a powerful catalyst for the energy efficiency industry in Australia. Since the schemes commenced in 2009, new businesses with new business models have been investing capital and driving rapid and targeted market penetration of lowest cost new and innovative energy saving activities. This includes innovative product development that is leaps and bounds ahead of minimum performance standards in various cases. Low income households continue to be major beneficiaries.

The biggest barrier to being part of energy policy conversation at all levels of government is that legacy energy market supply stakeholders stand to lose out (a bit like hospitals losing out when people focus on staying healthier). As well, there are no equally powerful demand side commercial beneficiaries that stand to gain from a paradigm policy shift, so advocacy for balanced demand side policy is comparatively non-existent.

The EECCA called for a National Energy Market Demand Side Operator back in March. The call still carries as we repeatedly witness a lack of support for proven demand-side solutions that can be delivered immediately as the energy crisis digs in further.

A full lighting retrofit of Sunshine Hospital in Western Melbourne was a key part of Western Health’s objective to reduce its carbon footprint. After a thorough assessment, the upgrade included LED tube, backlit and circular panel and downlight alternatives to replace old inefficient lighting. Following installation of around 4,500 lights, the hospital saved 68% on its lighting consumption, which will deliver 10-year savings of more than $2.3 million. The first-year return on investment is 84% with a payback period of 14 months. The annual lighting energy savings are 1,272,147kWh. 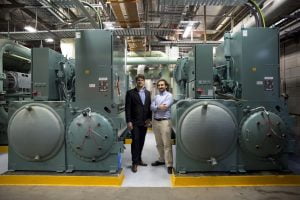 The climate control system at the Art Gallery of NSW centres around a chilled water system which runs constantly. To reduce energy costs and maintain reliability, two old rotary-screw fluid-chillers were replaced with high-efficiency, variable speed, magnetic bearing centrifugal chillers and further efficiency improvements were introduced for the cooling towers, water pumps and control systems. This project qualified under the NSW scheme for creation of more than 12,000 energy savings certificates, which equated to funding of over $100,000. Using the measurement and verification method it was determined that annual energy savings of 12,000MW would be achieved, representing 15% of consumption. This equates to annual savings of $140,000 in energy costs.

Solar reflective paint applied to the roof of a 10,000-square-metre DHL warehouse in Western Sydney provided significant energy savings to a heating ventilation and air conditioning (HVAC) system and enabled energy savings certificates to be created under the NSW scheme. The radiative cooling has been calculated to reduce energy consumption by about 390MWh a year. Following the upgrade, the energy bill dropped by about $40,000 per annum. The certificate revenue provided an upfront return on investment of about 31% on capital expenditure.

For further information, or to discuss how Wattly can help you, please call us.

Alternatively, complete the form and we will be in touch with you.