Energy savings schemes have delivered an average annual reduction of total electricity consumption of almost 4% where they operate in Vic, NSW, SA and ACT. Combined, they are saving more than 5GWh of electricity annually, writes Hamish McGovern. More than 2.3 million households and businesses have undertaken upgrades under these programs which combined are saving more than $1billion annually in electricity bills. These are the first aggregated findings of this type and demonstrate the significant contribution and potential of the schemes.

> 2.3 million households and businesses have participated;

The types of energy users being targeted vary under each scheme:

Two main types of methodologies are used to calculate energy savings to be achieved by an upgrade:

Electricity bill savings achieved based on the latest analysis by the Victorian Government indicate that in 2018: participating households will save an average of $175 this year alone; and participating businesses will save an average of $4,700 this year alone. More energy intensive sites are saving much more. An Independent Review of the ACT scheme completed in June 2018 found that on average, participating households are saving $5.65 per week ($293.80 a year), with an average saving of $57 per week ($2,964 a year) for participating businesses. Individual case studies illustrate that actual savings can be much greater: for up to $3.4m over ten years (See Unilever case study).

The schemes are saving much more than they cost with a ratio of about 1:4 costs versus savings. Households in jurisdictions with schemes pay less than $1-3 a month to support the schemes. Regulatory impact statements continue to demonstrate economy-wide savings in the billions. Some schemes operate with subset targets: low income and vulnerable household targets, and audit targets to improve understanding and evaluate the most appropriate upgrade potential in key markets. Estimates suggest that more than 4000 jobs have been supported and more than 100 new innovative businesses have mobilised, with more to come. 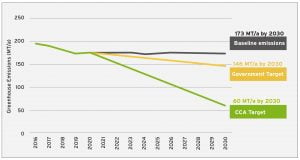 Our latest analysis indicates that if rolled out across Australia by 2030, energy savings schemes could deliver one-third of the emissions reductions required by the electricity sector to meet our Paris commitment if supported by complementary energy efficiency measures. This analysis was based on a contribution of greenhouse gas abatement by the schemes of 37.8 Mt/a by 2030.(ii)

The Figure Electricity Emissions 2016-2030 (chart above) demonstrates the possible scenarios:

Black line: baseline emissions of 173.3Mt/a by 2030 with Business As Usual (BAU) and no emissions reduction target based on latest national greenhouse gas projections;

Yellow line: this is the Government’s target of 26% reductions in electricity emissions from 2005 levels by 2030, that was being incorporated into the National Energy Guarantee (NEG);  and

Green line: a target of 60Mt/a by 2030 which would meet a target of keeping a temperature rise of less than two degrees based on modelling for the Climate Change Authority (CCA) Report, August 2016.

Industry is mobilising inspiring world-class solutions with the support of effective policy settings in some parts of Australia. After operating for almost a decade, the existing energy savings schemes have been proven to reduce energy consumption and enhance productivity and customer experience. If we can divert significantly more incentive and investment into energy upgrades rather than network upgrades we will be able to innovate much more to minimise global temperature rises.

We also need to value the technology innovation and market disruption that have been stimulated because of the market opportunities these schemes are providing which wouldn’t be opening up otherwise.

The schemes are highly regulated: products accredited for installation must meet rigorous compliance requirements. Rigorous methodologies are developed by governments in continuing consultation with industry to determine energy savings to be delivered by upgrades.

Stimulating a highly competitive market to deliver better energy efficiency outcomes is driving product and service providers to offer attractive options that use less energy and last longer as well as pushing on broader service improvements.

A significant reduction in energy demand is being achieved rapidly across a range of industrial, commercial and community amenities with the support of energy savings schemes in Vic, NSW, SA and ACT. These projects are increasing demand for energy efficiency investment, innovation, expertise and upskilling.

The Hills Shire Council in NSW installed in its Castle Hill car park an energy saving air quality monitoring system and accessed $8,000 through the NSW energy savings scheme to offset upfront installation costs. Ongoing energy costs will be significantly reduced due to annual energy savings estimated at 77MWh. Maintenance costs will go down because of less wear and tear on fans and motors which now run only when carbon monoxide levels in the air rise to a certain point, compliant with air quality standards. The energy-saving installation included carbon monoxide monitors, variable speed drives and a new building management system providing verification of energy savings. (Information courtesy of Energy Conservation)

A large council in Sydney reduced its street light electricity consumption by 80% when it replaced 750 lights with LED technology. Street lighting is the largest component of the electricity bill. A total of $66,000 was saved on the upfront installation cost under the NSW energy savings scheme. The council will continue to save more in upfront and ongoing costs when it replaces faulty or end-of-life lights in the remaining stock. (Information courtesy of National Carbon Bank of Australia)

An upfront saving of $41,000 delivered under the NSW energy savings scheme contributed significantly to the business case for a Heating, Ventilation and Air Conditioning (HVAC) upgrade at the iconic Reader’s Digest building in Sydney. The upgrade will deliver electricity reductions of 25% a year for the HVAC system (237MWh reduction annually). The upgrade comprised replacement of two 500kW chillers, installation of variable speed drives to the chiller and condenser water pumps, and addition of two cooling towers and control integration with building monitoring and control systems. (Information courtesy of National Carbon Bank of Australia)

Borg Manufacturing upgraded its main dryer fan to reduce electricity consumption in its processes for melamine, MDF, mouldings, doors, shelving and joinery components. The NSW energy savings scheme delivered an upfront financial incentive of $300,000 enabling the upgrade to proceed. Annual energy bills will be reduced by $150,000. (Information courtesy of Wattly)

Replacing inefficient industrial fans and controls enabled Kimberly Clark to save $105,000 upfront via the NSW energy savings scheme, a major incentive to get project go-ahead. Annual energy savings of 680MWh should be achieved. New variable speed drives replaced manual control air flow dampers which were inflexible and inefficient, providing better control of the production process of products including Huggies and Kleenex. (Information courtesy of Wattly)

An extensive lighting upgrade at Unilever’s Tutara facility in regional Victoria will save them more than $1.6 million over 10 years. With an upgrade of more than 1,200 lights the site should save 73% on electricity consumption with a very attractive 173% return on investment and a payback period of only nine months. Also upgraded was Unilever’s Minto site in NSW which manufactures Streets ice cream. About 1,300 upgraded lights should deliver a 76% saving on energy consumption and $1.8 million energy bill savings over 10 years with a project payback period of eight months. One of Unilever’s drivers was to reduce greenhouse gas emissions. These projects combined should avoid 3,371 tonnes of carbon dioxide. (Information courtesy of Shine On)

Intelligent lighting gets a boost

Energy savings schemes have dramatically increased the innovation and uptake of intelligent lighting control system technology by making it more affordable for businesses with upfront financial incentives.  This technology has become an essential aspect of LED lighting upgrade improvements to maximise energy savings.

Energy efficiency turnkey business, Shine On, has seen a 20% uptake in intelligent lights since 2015 and is set to launch a wireless cloud-based system integrating artificial intelligence (AI) to capture this customer demand and again raise the bar for lighting innovation.

Managing director of Shine On, James Johnson, said: “Since we commenced operating in the lighting space in 2009 we have seen a 100% increase in the efficiency of LED technology (80 lumens per watt versus 160 lumens per watt). We are continually trying to increase the efficiency of our products to benefit our customers: they receive higher subsidies, they save more on their electricity bills and they emit less carbon. The energy savings schemes are helping drive this innovation.”

“Intelligent lights communicate through wireless mesh networks. Every light has an inbuilt ambient light sensor and motion sensor. Ambient light sensors allow each light fitting to dim according to how much light there is in a facility, therefore minimising energy consumption. Motion sensors are used in areas where constant lighting is not required, for example warehouses, ensuring that lighting is only used when the area is occupied. The fundamentals of this lighting control technology are not new. What is cutting edge is the ease and simplicity of configuring these new systems. What would have taken weeks and involved high labour costs and wiring in the past now takes minutes,” said Johnson.

Shine On’s soon-to-be-launched cloud-based system of implementation provides a simple intuitive user interface which enables adjustments to be made in seconds to the intelligent lighting system. The new system uses AI to automatically optimise lighting and to control settings based on the user’s preferences and big data will further improve how the facility is configured.

(i) Figures based on: annual reports of schemes, regulatory impact statements and registries; EECCA Energy Savings Schemes Report, 11/17: Table 4 – targets 2009-2029 metrics conversion to MWh, p 14 using figures from 2009-2017, and electricity consumption of each state in 2017. Assumptions include: allowing for deeming provisions, 1MWh of electricity avoided delivering 1 tonne of greenhouse gas abatement and bill savings based on an average of $0.20c/kWh.

(ii) ESIA White Paper: Setting ambitious targets for energy savings schemes Australia-wide 2019-2030, 3 July 2018, p7. The contribution of energy savings schemes of 37.8Mt/a by 2030 is based on considering as a base reference the target of the largest scheme (Vic) of 6.5Mt/a of abatement by 2020. By 2020, emissions abatement for the Vic scheme could be about 1 Mt/a per capita as the population of Vic is likely to be about 6.5million by 2020. If this 2020 abatement target is increased by 25 per cent – which would equate to a 1.25Mt/a abatement per capita, and then rolled out across Australia by 2030, based on an Australia-wide population of 29.8million by 2030, an abatement target of 37Mt/a could be reached by 2030.

For further information, or to discuss how Wattly can help you, please call us.

Alternatively, complete the form and we will be in touch with you.